2017 is going to be a star-studded year as some of the biggest names in the music biz take to the stage in Inverness. From rocking it old school with Status Quo and The Beach Boys, to being serenaded by Bryan Adams and Olly Murs, we’re drumming up our favourite gigs with our Inverness Gig Guide for 2017. 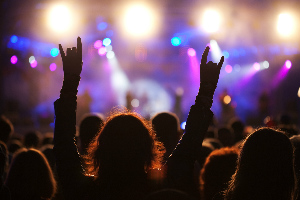 Raising the curtain on what’s shaping up to be the biggest year in Inverness’ music history is music legends, UB40. Set to take the stage at the Inverness Northern Meeting Park on the 19th of May, their unique blend of reggae and pop will set the tone for the rest of the year. So sit back, enjoy some red, red wine and the way they do the things they do.

They’ve sold over 100 million records, toured the world, played to millions and now they are heading to Inverness to play for you. So if you are in the mood for some good vibrations, don’t miss The Beach Boys at the Inverness Leisure Centre on the 27th of May in their 50 Years Of Good Vibrations tour. Performing to a small crowd of less than 2,000 people, tickets are selling fast. Wouldn’t it be nice to see the pioneers of good ol’ surf rock play some of their biggest hits from their 50-year career in an intimate show in the Scottish Highlands?

No stranger to rockin’ all over the world, Status Quo will be gracing the stage of the Inverness Leisure Centre on the 20th of June. The legendary rockers with – prepare to feel old – nearly 60 top 40 hits will be playing a stripped back, show-stopping aquostic gig in the heart of the Highlands.

Bryan Adams Will Make It A Night To Remember

Compared to U40, The Beach Boys and Status Quo, Bryan Adams is practically a newbie on the music scene. But the summer of ’69 hitmaker will be hitting all the right notes this summer in his first ever Highland gig on the 16th of July at Bught Park (not to mention the only show he will be playing in Scotland this year).

You don’t know love till you’ve seen Olly Murs live at Bught Park. The troublemaker who shot to fame on the X Factor will be heading to the Highlands on the 22nd of July to perform an outdoor show in Inverness.

So there you have it. A guide to all the hottest gigs in Inverness this year. Why not join us for a delicious dinner before the show or a wee dram in the Kingsmills Bar before the show. Now isn’t that just music to your ears?